Florists were on the top of my ‘to see’ list when I visited London last week. Gardens, Museums and St.John (the restaurant) following quickly behind. Gardens, Museums and even St.John, require a bit of planning, but flower shops are just places you happen upon along the way. Sometimes even when you least expect them. I snapped a few shots of a couple of places I thought were beautiful and interesting. Notice the prices for the bouquets and flowers by the stem. The dollar is currently $1.66 to every English pound. Not really a great rate exchange, but exquisite bouquets and fragrant cut stems are hard to resist at times.

Here is Chez Michele in Borough Market, beginning to close for the day.

Beautiful Celosia at close to 5$ a stem.

Here are images of the florist below at Liberties. 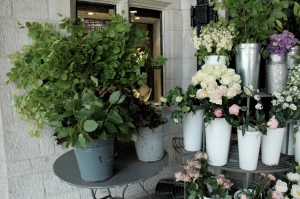 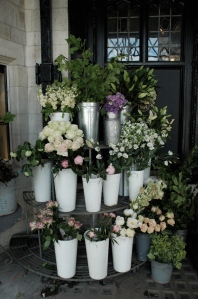 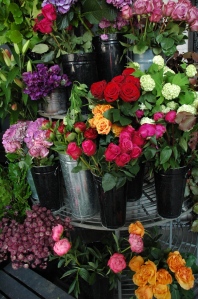 It turns out the Anthropologie store on King’s Road has a flower shop right next door to it. It is a pop up shop by well-known London florist The Real Flower Company. It was very cute and slightly pricey (much like Anthropologie). I loved the arrangements set in simple sage green bags, ready for take away. The beautiful bouquets were elegant and natural and featured fresh herbs, which are a perfect match to peonies and roses. 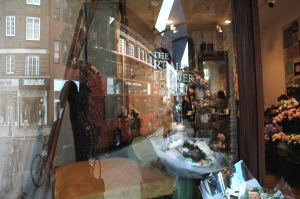 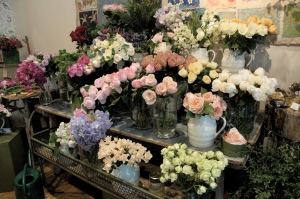 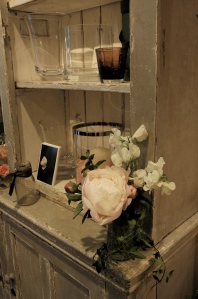 I saw many other flower stores and ‘bucket shops’ on side streets. The ones above happened to stand out a little more. I was delighted to see just a few of the current floral trends happening in London.

Happened to walk past the Cartier store and observed a team of people putting the final touches on the window display. 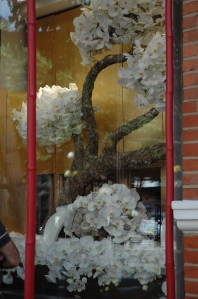 As you can see Phalaenopsis orchids pretty much dominated the facade, with the exception of a branch. 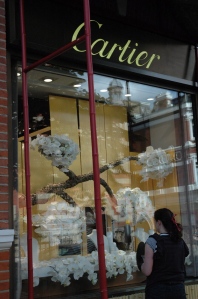 A woman stood on the outside of the window, holding a mirror so that the creative inside would nowhere to adjust each stem of orchid. Serious work here. 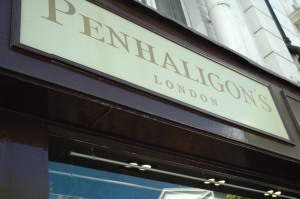 Strolled past Penhaligon’s an old English perfumery and noticed a simple arrangement of stock in the window.

Some people don’t like stock as a flower primarily because of its scent. Secondly it is often used as filler in “grab and go” flower bouquets so it gets a bad rap. I happen to really like it all on its own, preferably used in mass. The pale yellow color looks great when paired with the white. Imagine 4 bunches of each color fashioned into a low cylinder…fabulous, though fabulously fragrant. 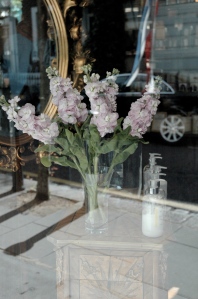 And on a table near the doorway they had a vase with would you believe, Carnations…and not even cut short. 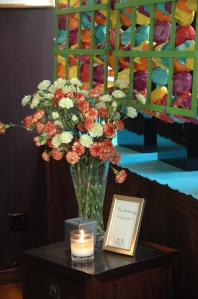 Is it the flickering fragrant candle beside, or the gilded frame, that completely elevates this vase arrangement of carnations into something else entirely.

I noticed a tall arrangement in the window of a restaurant near the Hayward gallery. This was one of 2, the other arrangement was in the front window. Filled with pink hydrangea, un-bloomed lilies and tropical foliage.

Here is Allium (part of the onion family) used in a window display of a store I forgot to take note of. Possibly a clothing store.

Walking down King’s road in Chelsea I must have been the only one gawking at a huge billboard hung high above. 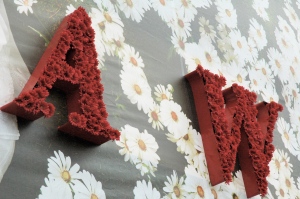 Billboard was for Jigsaw a London clothing brand. Nice use of red Gerber daisies here. Fake ones most likely.

Many flowers have come and gone recently. But what has gone unnoticed and untouched is this small arrangement of backyard blooms. It has endured what could be 3 weeks or more. Granted once purple blooms are no longer, what remains are healthy vibrant greens still working magic as part of a vignette in my office space. Who knew this would be such a long-lasting cut. Makes me really happy to know it is growing all over the back side of my place. The water has now been changed. Let’s see how long it goes now..